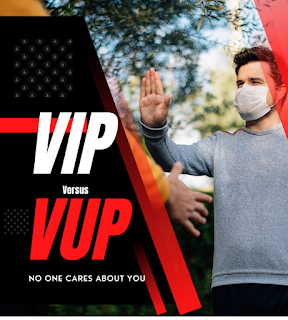 In India, there are two kinds of citizens, VIPs, and VUPs. VIPs are influential people who rule us directly or indirectly by having a connection with people who have official power. VIPs mostly have money, power, and connections to bend laws. They are the creamy layer and they are rightly called Very Influential or Important People. When VUP people die, due to covid19 & lockdown restrictions, if the number of persons who can attend the funeral is 20, from the 21st person onwards, authorities will slap cases on the relatives of the dead person who is already devastated by the loss. However when a former minister or religious leader dies, because they are VIPs, more than 20 dignitaries attend. VIPs can use curtains in their cars for privacy when courts ban windscreen stickers on car windows. Very Unimportant Persons can pay a fine when demanded by motor vehicle authorities. VIPs can store Ivory tusks of elephants, kill forest animals or drive over homeless people who sleep on the footpath, and rules are changed by authorities to avoid them visiting jails and eating jail food. VVIPs or ministers can take an oath with their 500 friends even if the place is under triple lockdown. VIPs can visit airports with bullets in their baggage whereas VUPs will be jailed under serious charges if they try to fly with weapons of any kind. It means that rules bend for VIPs. As VUP, understand your duties and responsibilities, your job is bending your backs so that VIPs can use them as stairs to climb up to where they are today. So follow the rules else it will be like giving an invitation to misery.