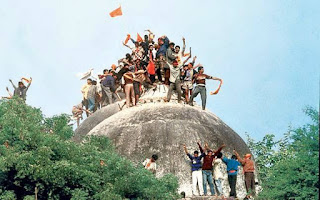 Fanatic Barbarian Invaders in the past destroyed thousands of hindu, jain , sikh and buddhist temples. Ayodhya , the birthplace of Lord Sri Ram was also under seige.Hindus who are devoted to Prabhu Shri Ram want to have a temple at the place of the disputed structure once they were freed from the fanatics.It became controversial and communal issue so that many indian people got killed in communal riots that happened after a mob of emotionally charged karsevak hindus who are devotees of Prabhu Shri Ram destroyed the disputed structure illegally with force.It did not become a local issue.It divided hindus and muslims in India.BJP lost elections in Uttar Pradesh for decades after this incident.India lost deep assets in Pakistan who helped us for covert operations.Demolition of the disputed structure is a wound that would take lot of time to heal.One side celebrates as Shourya divas and the other as Black Day.More than 25 years went away.Past is past.Hope that muslims and hindus would sit and talk.That would help in starting the construction of a bhavya ram mandir at Ayodhya.We have to settle this issue amicably so that both sides win and move forward as one nation.