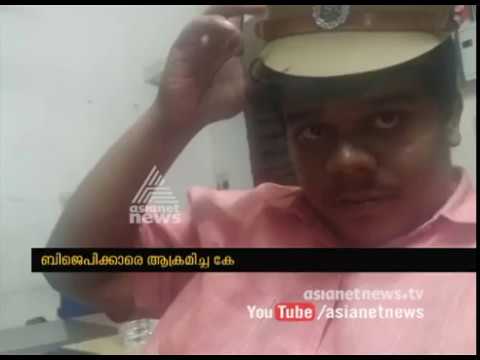 A journalist who shows guts to report about arrested communist partyman who took selfie wearing police officer's cap, is attacked on social media by rating his channel's facebook page with one star. Isn't this the true face of fascism which do not want to show their ugly shades to others?.If some one exposes the ugly side, they are attacked on all fronts.Look at the mirror to find who is the fascist.Kerala Marxism is based on a concept called Stalinism which favors a cult leader at the centre who gives killing orders to exterminate all opponents.Political violence is their favorite game and Kannur is their laboratory to create one party rule & hegemony.

Why don't you suggest both cpim and BJP are same side of coin, but earlier party focus on people rather than drama.As discussed earlier BJP is the biggest threat of democracy, they are just playing dirty Hindutuva politics nothing else. It is the biggest threat to every human in India. Count this on me if not.ah palo thudangi claiming independence and nationalism. Onnu poku Maneesh Jayachandran. Ethoke aa mandan Sekhar Swamy eduthu poyi para.I'm sure RSS is going to play more violence soon in Kerala to create tension. But at the end of the day people of Kerala is going to reject them again and again. Because we understand the Bjp ploy than any other state.

BJP has no relevance in Kerala.They are with a lone MLA.That is why their highhandedness are not discussed here.

I don't think Hindutva as a political philosophy will go rogue unless rogue elements infiltrate positions of power.I do not think it as dirty since I believe hindu nationalism resulted in the independence movement.Hindutva leaders present in the congress like Lal-Bal-Pal as well as old Jansangh men were people with integrity.

Congress had all kinds of people.It was a nationalistic movement.They even tied up with Khilafat wadis whose idea was to make califate. Those who disagreed with congress attitude joined the muslim league.Only after nehru , congress turned pseudosecular. If you could read history you would understand.it is foolish to consider Congress (I) which is a private limited company to the congress party that existed pre independence.

Congress (I) too implemented cow protection laws in many states like Gujarat, Uttar Pradesh,Rajasthan etc. though they did not make a national law despite having huge majority in those days.
Indian Politics Opinion Politics