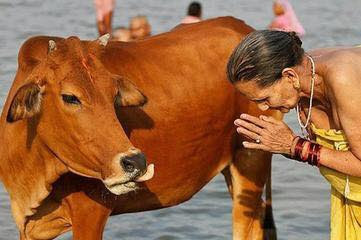 Happy to hear the good news about the new government policy that will ban smuggling of cows from the farmer and transporting it to locations like Goa, Kerala etc, for slaughtering.Have to see the gazatte notification to know about the implications & effects of the new policy.
This is one of a best gift NDA government can give it to the core voters who stood with them during the bad times on it's third anniversary.But Is India ready for such a ban?This could provide fodder to the weakened opposition and could be used against the government particularly when it overstepped in the case of Jallikkattu which was cruel, barbaric & should have been banned or conducted symbolicly only.A dalit muslim combination is being tried to subdue the triumph of Narendra Modi and his leadership.This incident can be cited by them as a tool of the state to deny the favorite dishes of sizeable populations in India.
Jai Shri Ram.

>> India bans Cattle Slaughter Across India, Restrictions on Sale Too || The Environment Ministry has banned cattle slaughter and introduced restrictions on the sale of cattle to prevent their killing.

A gazette notification, titled Prevention of Cruelty to Animals (Regulation of Livestock Markets) Rules, 2017 by the Ministry of Environment, Forests and Climate Change states that no one can bring cattle to an animal market unless he or she has furnished a written declaration that the cattle will not be sold for the purpose of slaughter. Further, upon sale of cattle, the animal market committee will take an “undertaking” that the animals are for agricultural purposes and not for slaughter.