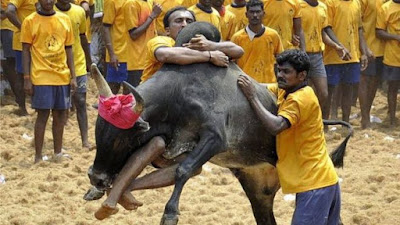 January 20,2017: Yes bull meat eaters crying against mistreatment towards bull taming sport in Tamil Nadu. Of course cruelty to bulls should be stopped. But  disbanding the bull meat industry could do better good to stop cruelty. Shut down units of Meat Products of India and mass murder of cows, bulls and goats during religious festivals first and then come and preach us about animal rights.At least the bull survives and are well fed after the ancient barbarian bull taming sport of Jallikettu. Brave men needed a podium to prove their mettle in the ancient times.If we stop this, the cruelty will stop, so does the local tamil brave men who would join Indian Army, Police or Criminal Gangs. Indigenous breeds of cattle can be bid good bye.


Because bull's permission is not taken before subjecting it to torchure.It is being fed up and allowed to grow to a healthy beast so as men could tame it in the sport. I believe kerala's thrissur pooram also will suffer defeat in Supreme Court .Same PETA is spending dollars in Supreme Court to stop Thrissur Pooram and elephant usage in temples..


That may be true. but state and central govt is supporting this sports. but both failed to present the supporting evidence . "PETA was able to gather evidence that the sport was injurious to bulls and people. An authorized inspection by the Animal Welfare Board of India which comes under the Ministry of Environment, Forests and Climate Change, was carried out. There were also other inspections made and submitted to the court. People on both sides were able to give their views. Those who supported animal rights were able to prove that jallikattu violated the Prevention of Cruelty to Animals Act 1960, since the year 1960. " .i got this after googling. if this is true. the central govt need to amend PCA act asap. i am not against or support for Jellikkatu .also i felt tamilians giving more importance to bull-taming instead of being concerned about the severe agriculture crisis that has gripped Tamil Nadu
https://scroll.in/article/826545/no-harvest-no-festive-cheer-its-a-black-pongal-for-drought-hit-farmers-in-the-cauvery-delta


January,8, 2017: Last year I was against it.This year I feel it is an adventure sport like Spanish bullfighting. I condemn both.But for building brave men from tamilnadu , jallikkattu was an avenue.Improve the facilities, stop cruelty against bull and safety arrangements can be thought about.The liberals who support slaughtering and enjoys Spanish bullfights turns themselves in to animal lovers on jallikattu day.They regain their true nature on bakrid and other festival days when mass slaughtering takes place. 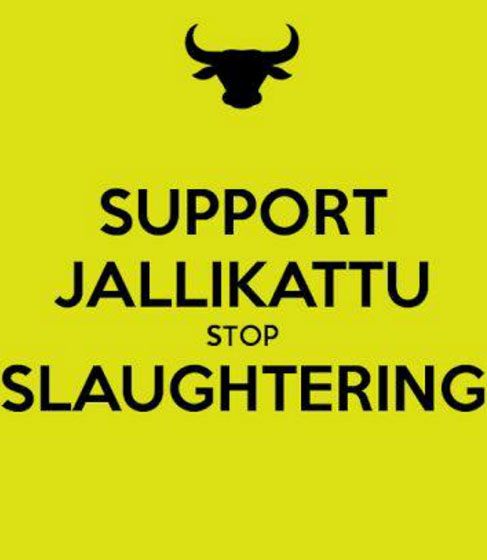