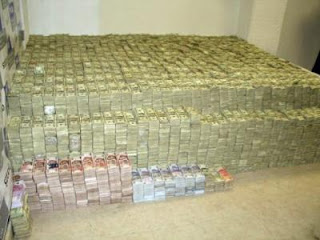 This was a carpet bombing and not a surgical strike. Short term effects are bad. But in the long run , squeezing the parallel and hidden economy could be good. Anti corruption methods like appointing Lokpal which they have kept in cold storage should also be done. The banking system was never perfect or functional in the first place. So overloading them had it risks. Only a strong prime minister who had the spine could do it since public backlash could come and would not be nice for the ballot boxes. Even riots or mutiny can happen when majority of notes circulating were withdrawn and one day people were asked to live without any currency.Let us hope for a brighter future and work towards building a new India. 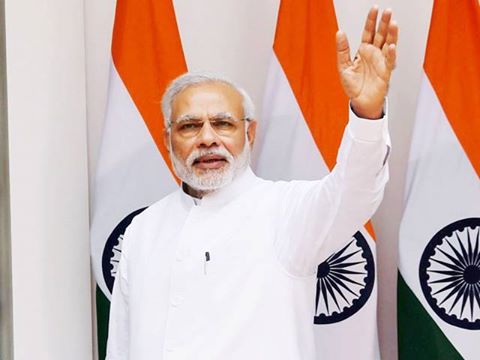 Message from the Prime Minister is loud and clear. He is there to do his job. If you throw him out of power, he is ready to pack his satchel and go like APJ. But he will do his job whether you like it or not.But underestimating Indian Jugaad will be a big mistake. In the span of two days I have seen three persons who mentioned about ways of converting black money to white.In the war between the anticorruption drive and the whitening activities of the criminals, who will win?

There is no compulsion for Jaitley ji to win elections. As usual, He can just lose election and come back as MP through Rajya Sabha route and sit in opposition bench.Look where these financial experts are taking Modiji to? Recalling 11 lakh crore rupees and giving 4 lakh crore rupees (till Dec 8,2016) and asking all people to become digital all of a sudden does not seem bright. 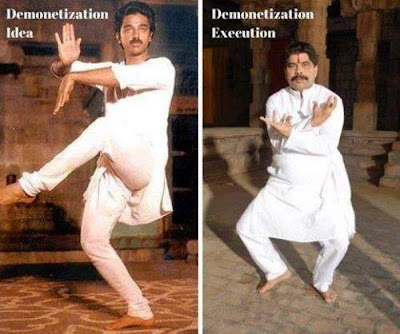 December 15,2016: Avoided three ATMs with long queues and visited three ATMs with short queues today. All had money but that was 2000 rupee notes which I do not solicit.So I had to come back dejected.The 100 rupee notes were all finished from those ATMs.The petrol filling station I visited displayed a POS terminal at prominent place and wrote that all credit and debit cards are accepted. But the fuel outlet staff failed to convey me whether there would be any additional fee slapped on the fuel bill. I was eager to bag the 0.75 % fuel incentive or cash back discounts offered by pumps as a part of promotion of digital money.So I did not try it out.I heard mixed reactions from the public about the currency crisis. I am fearing whether the indians who adore a chalta hai attitude is cultivating a habit of learning to live at peace with a currency deficient economy. Equally disturbing is the lack of an opposition with unity or integrity. Why the Congress is not understanding the reality? Replace the idiot with a better person to take on NaMo. 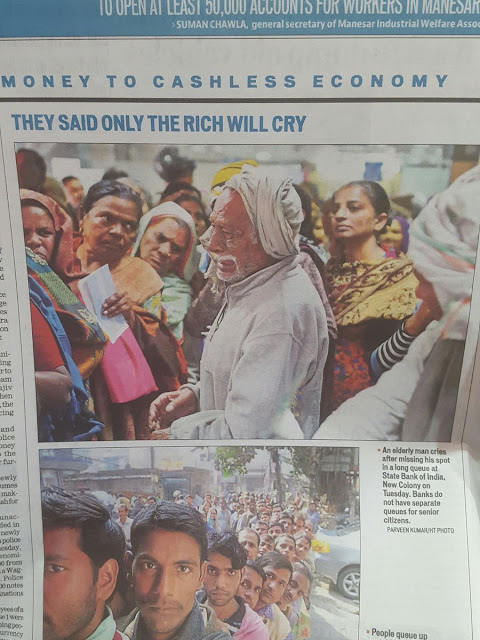 Update on 15 June 2017: The much anticipated & daredevil act of demonitisation of old currency which i vehemently supported has failed.Poor implementation failed the purpose.Farmers suiciding & protesting and economic data provided by the government leads to that conclusion.Rulers have to come out from their glass houses and learn the situation of the public.I wish Modi take up the situation as a challenge strongly as he has done in the past.

RBI has come up with the figures of demonitisation. Some people wanted it to fail.And it has happened.Large scale whitening of black money as well as genuine fake notes has indeed happened.Idea was great.But the execution was disastrous.A ruler must definitely take risks rather than sit tightly to the throne.Only good thing that happened was that the parallel economy has been defeated.They were forced to join the formal economy.And the fear about future recalls would stop them from hoarding cash.