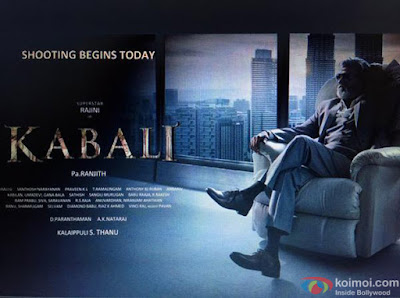 I had to watch Kabali yesterday evening. Since the release of the Rajnikant starrer, people in Kerala joined the mass hypnotism done by the marketing team of Kabali. So tickets were hard to get and the theater was crowded. I have been enjoying Rajnikanth movies for a long time. But have avoided movies such as Lingaa, Kuselan and remake of malayalam Manichitrathazhu psycho movie. I approached this movie amidst negative reviews. But the movie was a typical ganster movie. Glad that Rajnikant have come down from superhuman personality to a common man whom bullets can injure (but cannot kill).SPOILERS AHEAD. ..The hero is an educated tamil migrant who choose to take arms and engage in criminal activities to help and support tamil migrant population. Just like dons Haji Mastan does charity with his money, Kabali also runs hospitals and schools to rehabilitate tamils. Kabali run a crusade against drugs and flesh trade rampant among the gangs of Malaysia and finds his family ruined in the aftermath. As usual in the tamil movies, the inferiority complex of average tamil man is being used well in the movie. That is where Rajni has invested over years for his career. Rajni is living the tamil dream of men with black colour having inferiority complex over being black and used to being insulted by arrogant whites over their complexion. The average tamilian dream of a fair girl, ability to throw away people around defeating the laws of gravity, rags to riches story and extreme adherence to morality in spite of defeats in personal life. The film makers have introduced the racism element cleverly in the movie. Just like the antihindu elements in PK and prohindu shivlinga scenes in Bahubali. Tamil people always complain why they are being targeted and mistreated in foreign countries. It is because where ever these indians go , they take their culture with them .In Islamic states like Saudi Arabia, their nationalism is based on religion. Migrants have to blend with them, keep their religious practices private in fascist nations like Saudi Arabia. Else those indians will be butchered. But tamil people have extreme fundamentalism over their language and race. Tamil terrorism is a menace to the society. The movie fails to address that .It chooses to sympathise with it. Rajnikanth is a phenomenon that deserves global attention. How he generate mass fervor and the money he makes with marketing, PR and global releases should be studied by all students with keen attention. #Magizhchi
Entertainment Movie