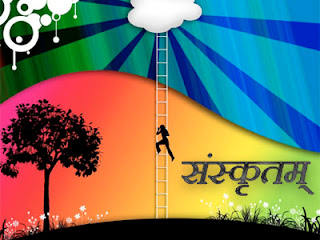 I have different dreams which i wish to materialize in this life.One such dream was to learn sanskrit to read ancient texts such as vedas,upanishads, puranas in their original form.This idea was lying dormant in me for years.In April 2013 i heard from Mr. Madhu , a psychology counsellor about a ten day sankrit speaking camp at Vettikode about 5 kms from my village.Immediately i said yes.........

The ten day camp went well and it ended on 26.04.2013. It was very difficult for me to attend considering my time constraints running Orangis Online.However i had a resolve to do it. The program was conducted by Vishwa Samskritha Prathistan or Samskrithabharathi which is a non profit organisation working to spread sanskrit. There is no FEE for 10 day [20 hour] Samskritha Sambhashana Shibiram (Sanskrit Conversational Workshop).The teacher is taking the class free of cost. Only the organisers need to arrange interested students and a place for the class to happen.After the class i felt so happy and content to have participated it.

Sanskrit was the language spoken in Asia from Kanyakumari to Afghanistan in the ancient times.However after British invasion of India, the british took a decision to shut down all sanskrit schools. Indians are still in that hangover even after the british has left India. So we are seeing sanskrit as a DEAD language in India spoken only by a minority and at remote locations like Mattur village of Karnataka, Jhiri of Madhya Pradesh etc.I did not become a sanskrit scholar after the 20 hour class.But i learned the basics like an LKG level kid at kindergarten.I decided to study the six month correspondance course of SamskritaBharathi called Praveshah which is a basic course to learn sanskrit.The examination will be in December 2013.

How to Learn Sanskrit Language?
Are you interested to learn Sanskrit?
You might not get any government job.There may not be any speakers around you. Westernised indian people around might view you as a relic. You would have to teach your family and friends to use the language.You will require lesser words to express your feelings.Sanskrit is that kind of a language.Samskrita Bharathi will help you in your endeavour.They will arrange a ten day 20 hours sambhashana shibiram near you.They will teach only in sanskrit. So you will learn the language by talking.There are different teaching methodologies available. You can choose any of the different methods.

Visit http://samskritabharati.in/ for more details if you want to learn sanskrit language in India.

If you are in kerala , contact the following address of Samskritabharathi.