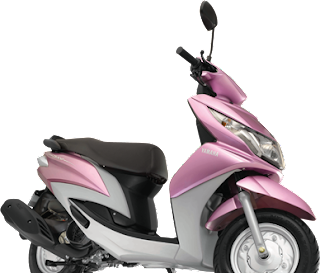 Yamaha as a brand is having a  special place among youths in India for two generations.In the two stroke era of the 1980s, yamaha was an iconic star.In the four stroke era, with its models yamaha captured young minds.Here is a gearless scooter from Yamaha for women.Quality and engine performance of yamaha bikes fares good with indian roads.

The scooter is designed beautifully and is expected to appeal well among the girls and young women.There is a slight similiarity with Honda Dio scooter.Headlight is Vshaped and is located at the centre of the front portion.Two indicator lamps are located just on top of it at the two sides.Instrument Cluster consists of speedometer and fuelguage.It takes up most parts of the space of the central console.So it can be read clearly.Switches and mirror is designed like any other normal scooter.Storage Spaces below the seat and smaller storage space in front and bag hook are the add ons.Seating position is on the lower side.It makes the ride more comfortable however not for the six foot rider because space is small in the front platform mostly because of storage space in front. The storage space under the seat is 15.5 litres.The graphics on Ray is also minimum and feels good and decent.Tail lamp is very cute in clear red colour and indicators on both sides. 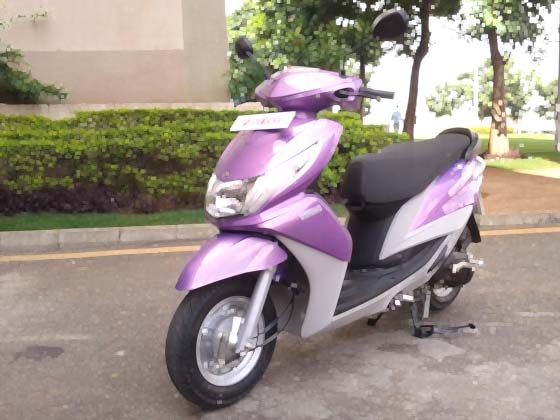 Four stroke air cooled 113 cc engine gives 7 bhp power @ 7500 rpm and torque of 8.1 Nm @ 5500 rpm.Engine can be compared to other scooter engines.Some technological improvements have been done for energy efficiency. Ray is a commuter scooter and not a performance scooter.Something which is comfortable to run around in a city.Cornering can be done at lower speeds.It has good balance on the roads.Eventhough throttle response is not that much encouraging, it offers good performance.Ray is meant for short trips.In short Ray is a good product offered for women. 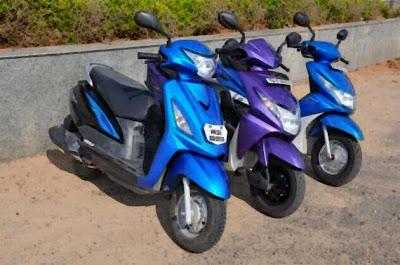 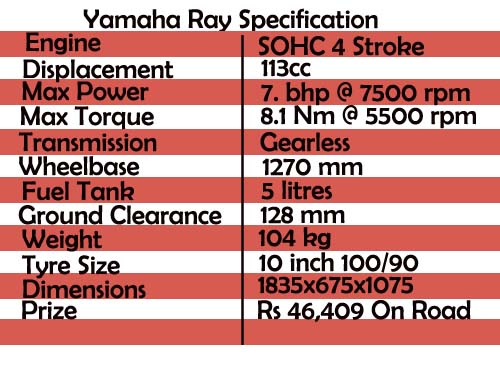