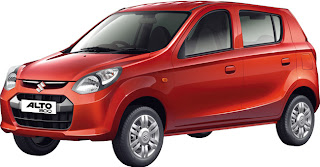 Maruti 800 is an iconic and most sold car in india.Because of it's iconic status maruti was unable to stop production since 1984. Now is the time for a replacement for it.The new Alto 800 is a replacement and positioned as the entry level value for money maruti small hatchback car.

It has some similiarity with Astar in looks but have uniqueness.Alto800 is made on the same platform of Alto.However dimensions such as height etc are different.Protruding headlights similiar to Astar (some people hate it) is a feature of Alto800.Black inserts, chromium lined grills,big black air damp (looks like its mouth), fat wheel archs are the changes.C pillar resembles the Alto.12 inch tyres and 160 mm ground clearance makes it appear larger than life. 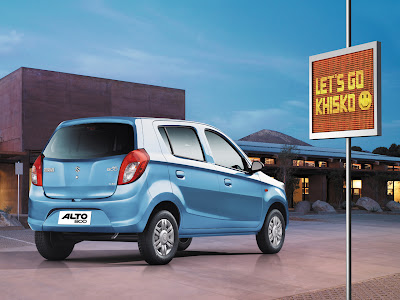 Rear design is also contemperory style.Tail lamps that originates from the sides, body lines in boot lids,big bumpers etc are the changes.Length is 100 mm lesser than old alto.However it is 15 mm wider and 15mm higher.Wheelbase 2360 mm is the same for both cars.Without doubt we can state that Alto800 is a new generation car than the older ones and more technically advanced.

The main turnoff for alto lack of space.Even nano at similiar price has more space.Low seating position was also inconvenient for short drivers.Alto800 has made honest attempt to address those issues.However the verdict lies with it's users.V shaped central console, dark beige coloured with black and silver finished  interiors  are beautiful.There are spaces in the dashboard and below it to store your stuffs and water bottles.Integrated headrests with front seats.To increase space inside thickness of door pads have been reduced.In rear seats the congestion feeled in old alto is not present now.Black and silver designs on the apholstery near the doors and else where is irritating (depends on your art sense).The placement of front power window switches behind the gear lever is annoying for the driver.One airbag on driver side is optional for Maruti Alto800.

798 cc F8D engine in Alto is the heart of Alto 800.They tweaked this 48 bhp engine for better performance.New short skirt pistons, new gear ratio, new compression ratio, uplifted air inlet system, new cable shift transmission and diagonal shift assist are the newer technologies and upgrades for Alto800. Torque increased by 11 percent to 69 Nm @ 3500 rpm.As a result of this, drivablity has increased in city and highways.Gear shift became smoother when changed to cable type. 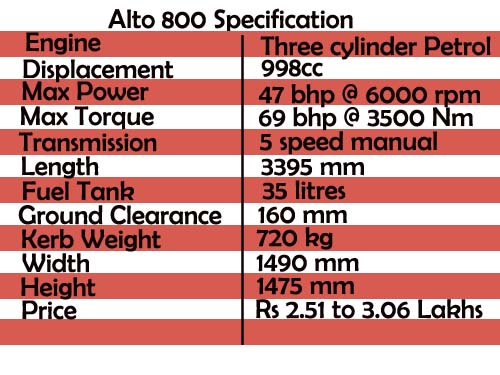