By Appu September 21, 2010
Disclaimer: The following hypothesis is based on random thoughts and is void of scientific reason.The author vows of him being ignorant about the ABCDEFGH of Geology. This blogpost might be foolish and might waste your time. You have a choice to navigate away.

There is a dialogue in the movie Matrix where Agent Smith a program in a virtual world tells Neo the hero about human beings. The movie is about man getting lost in the virtual world and get them slaved to machines in the real world.

Agent Smith:  "I'd like to share a revelation that I’ve had during my time here. It came to me when I tried to classify your species, and I realized that humans are not actually mammals. Every mammal on this planet instinctively develops a natural equilibrium with the surrounding environment; but you humans do not. Instead you multiply, and multiply, until every resource is consumed. The only way for you to survive is to spread to another area. There is another organism on this planet that follows the same pattern... a virus. Human beings are a disease, a cancer on this planet, you are a plague, and we... are the cure."

Some of the worlds are rightly places. Because we really are. Where are we going from now? I used to believe than what distinguish between a man and an animal was men’s thinking capability. But later I realized that human race are fools who are too greedy to live and enjoy today’s life endangering the tomorrow. If they have been lesser greed, they could have let humans survive more in earth.

Where is man going to live after bombing / damaging/ destroying earth? Maybe some one has booked spaces in Moon by 2010 like people buying spaces in Chinese ARK in the movie “2012”.I am not going to be another person predicting a doomsday.

All I am saying is that for every action, there is an equal and opposite reaction. So when you collect rocks from different parts and make a 50 floor building, lot of pressure is on the spot on earth than when there is no building there. Weight of all the objects, humans are pressing towards mother earth. Mother earth looks good outside. Beware it is her makeup. Earth’s crust is of width between about 5 to 50 kms. Beneath it from mantle to the core, it is very hot and humans will evaporate if we happen t o fall deep in to it. When you concentrate materials dispersed over a town to make a skyline, lot of pressure is acting to the bottom. As a result, such pressure adds up to the uncontrollable activities already happen underneath and will result in earthquakes, volcanic eruptions somewhere where crust is weak. 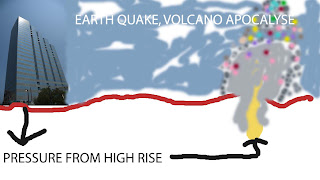 SO FELLOW HUMAN BEINGS  LEAVE YOUR BIG BUILDINGS, HIGH RISES AND STOP RAPID INDUSTRIALIZATION IF YOU WANT YOUR RACE TO SURVIVE ON EARTH.

What happens when you make a concrete building?

SO GO BACK TO THE CAVES!

But since no body is ever going back to the caves……….LETS WAIT FOR THE DOOMSDAY :)

TO BE CONTINUED……
Findings