The Evening was Worthwhile

By Appu January 15, 2010
25 years back, my Father built a building.We call it Vaisakh.It is located at Para Juntion, a place in my home town, Nooranad.Now this building has been divided to rooms and are leased to different clients.It include a family dwelling in the 1BHK home in the building.After my father's death, I am the landlord.One day i got a call from one tenant.I went there and found employees from the local panchayat measuring with tapes.Now they told me that the government is going to increase the building tax this year.This happened in mid 2009 and they gave me some forms which i needed to fill up and resubmit to them.
Now here is a situation that shows my true colors.I sat upon that statement for an year.It was supposed to be returned to the panchayat office within a fortnight.Now when the tax for 2009 - 2010 year was due, i remembered about the forms.I took them and searched for all the documents that might be of use.I could complete the forms in an hour, all the six of them.It was very funny.
I found a notice stating that the panchayat is conducting a revenue collection camp on 13-1-2010 near my place.Then i got to my maruti astar hatchback and drove to Muthukattukara temple Junction.There i found a young lady alone collecting cash.She gave me the receipt on payment of tax and instructed me to submit those forms to the panchayat office.The tax was not hiked this year fearing backlash from the public.I paid Rs 1042 and went to the panchayat office where i gave those statements and they declined to give me a receipt.
While i was doing all these tax works, my friend Saneesh called me to meet our other friend Gopi Krishnan.I came back to my home, had a lunch in 10 minutes and drove to Gopi Krishnan's home in Thazhava near Vavvakavu, Karunagapally on my Bajaj CT100 motorcycle.Gopi Krishnan is a software engineer working in Accenture, Hyderabad.At Gopi's home, i found Saneesh twenty minutes later.We watched Suresh Raina getting his century on TV.We knew that India won't win the match.
Saneesh came on his Hero Honda Glamour.Here is our trail.
THAZHAVA ----------> VAVVAKAVVU ---------------> OACHIRA ----------------> AYIRAMTHENGU
There is a lake between Ayiramthengu and Azheekkal.A flat boat transports cars, bikes and people throught the lake.They call it JUNKAAR........(i don't know the correct spelling). 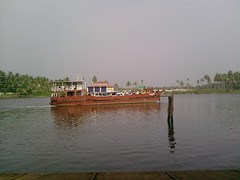 On the Junkar, it costs Rs 5 to transport a bike, Rs 10 for a car and 1 for a human.Once you cross it.There is a road waiting for you full of sharp S turns.Driving carefully here on the narrow road helps your bones to stay strong.Now you reach a small road that runs from north to south parallel to the sea.The road leads to Azheekal. 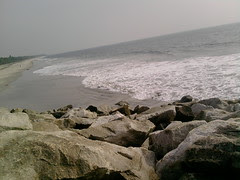 There was a small beach.We bathed there, watched the sunset, spend some quality time and came back. 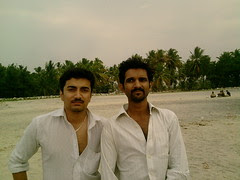 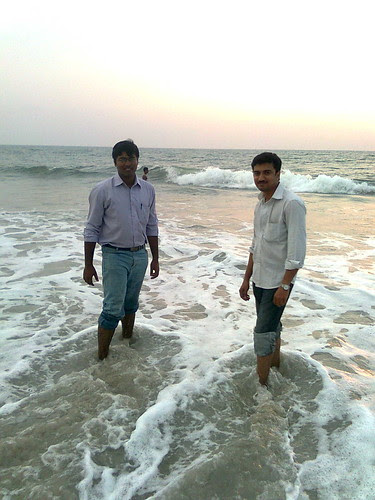 Life and Living it