It's getting hotter every year in kerala

Not only in kerala, temperatures have been rising all the years through out the world.Thanks to the phenomenon called global warming which is associated with human invasion.It is caused by a physical phenomenon called green house effect.
You might have seen a green house which is a glass structure insisde which plants are grown in gardens and homes.In a greenhouse, the heat enters is trapped in and makes it hotter.Certain gases like Carbon dioxide (CO2) possess a similiar property and they in the atmosphere acts as a greenhouse making earth warmer.Now due to man's unnatural and sporadic use of fossil fuels, the CO2 in the atmosphere is increading and so does the temperature. 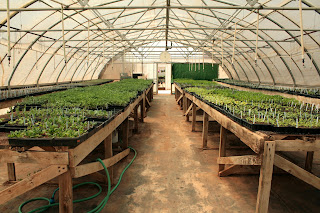 Mother Earth has a Solution
She is so kind and benevolent that evenif you harm her she does come up with a solution.The trees and forest does a check on CO2 as they consume it during the day time.So more trees and forest means you have a chance to make a balance.But again man becomes a savage by poaching in the forest.The cruel two legged animals wants to cut trees to met with the demand for furniture to be kept in posh multistoried offices and residential flats.
Do you know what is happening in a forest?
And animals in our forests die of lightning, in other formats like defforestation in poaching.The tiger need to learn to live and survive in a new world with traffic lights, concreted roads and skyscrapper buildings.The future of the elephant is unknown as forests are shrinking.Humans have no monopoly over earth.Earth belongs to the animals, birds and trees too.We cannot damage the earth irreversibly.
To the race who just thinks about themselves
More ice in the polar regions (north and southern pole regions of the earth) will melt as temperature increases.This means sea levels will rise and island nations like maledives would be submerged.Be ready to run when the flood comes.

Note
For those planning to go to the himalayas for safety.There won't be any ice their either.You can't make it because flood is there too.
Environment