Komli Inc is an indian ad network that provides banner advertising.Many indian advertisers are using Komli to reach out to indian diaspora around the globe.Do not use komli if your visitors are not ninety percent Indians.Komli has NRI ads of bharatmatrimony and simplymarry.

Komli is a system that is oriented towards the advertiser.That is if you can advertise to people in india at damn cheap costs.Comparing to advertising on other networks, advertising on komli is damn cheap.The after effect is that Komli pays less to the publisher.

For publishers, komli is a flop scene.Your ads are going to be clicked less than google adsense ad.The CTR would be too low.The EPM rates are unimaginably low.The only positive is that you get to see the earnings billed in Rs on the reports.Do you feel proud to be an Indian?

At http://power.komli.com the signed up user can see the following screen

Once you sign up you can see the dashboard and revenue report.The top left graph shows the pattern of revenue generation over this network over 30 days.It is titled 'Revenue (Last 30 Days) .The next graph is a bar type representation of week on week Net eCPM an impressions.
Now the eCPM gives you an information about how an ad network performs compare to other network.An eCPM of 8.9 was seen on a particular day.It means that if 1000 impressions from this ad network is displayed, you get 8.9 Rupees. 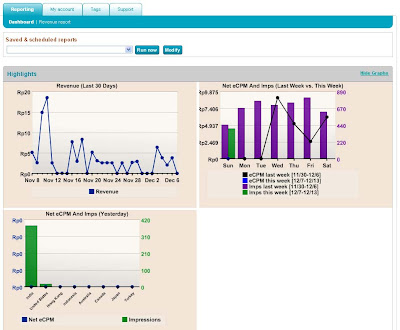 Komli stresses on conversions from the ads displayed on your website.It means that even if people have viewed on clicked your ads you get paid in paisas and if you want in rupees the visits should generate sales(mp3 player from futurebazaar.com) or sales request (called a lead like some one filling out a form at sharekhan.com or registering at shaadi.com).

There is less competition among advertisers for adspace in komli.The result ,they pay you less....

So better go for adsense , chitika for monetizing your website.If you still have a true indian website , affiliate marketing using DGM India is better.

If you still want to know where komli loses the edge with google see the image below:

If people at komli are reading this page, please understand that google became market leader because they were trying to share the pie with the publishers which you and tyroo are reluctant.

I guess you would blame the publisher websites for the less click rate.But you can work on your adserving also...right?
The Verdict
Use only on unsold inventory ad spaces...Better stay away from them.......

Unknown said…
Thanks for your review... I have also felt the same.. I joined them after seeing that they have an alexa rank of 576 and so I thought they must me the first good Indian network.. I could see good reporting and thought the reports were in dollars and cents.. but after a week I realized they were in paisas and rupees.... I was so irritated that I could not believe myself... they are really pathetic without a tinge of doubt.. how did they reach 576 alexa rank being such a horrible network .. I have been associated with dozens of ad networks for years and this was the least payment I have seen from any ad network.. they pay in rupees only when the conversions occur as was with me too.. but a conversion should give at least 20 rupees at the least... wtf does 2 or 3 rupees make sense for each converstion...it seems komli is trying to make a fool of the Indian publishers... maybe a new publisher who is using free blog on blogger etc. can even be fooled and start using them.. but webmasters like us who have been active for years and own several dedicated and VPS servers and dozens of other shared hosting cannot think of such a low paying network... even if I drive huge traffic in my sites I will never be able to pay even one of my dedicated server rental from the komli earnings leave apart anything else.. pathetic network with pathetic payments indeed.. advise everybody who wants to become a serious webmaster to stay away from them

I would also like to mention about DGM India as you mentioned about it in your post.. could you please inform me about them.. I thought of checking them out as they are an affiliate network and hence cannot pay as less as komli .. their affiliate rate was fair with 25 rupees on average on every conversion ... I put up their ad banners and alas I was not able to see any reports for five days.. I ran all options in the reports tab and it only showed no data to display.. I sent them a few mails too but they did not respond.. with time I also saw that advertisers were suspending their programs from DGM India.. this made me even more suspicious and I finally pulled down their banners from my websites.. are DGM India genuine.. if they are genuine how does the reports work.. could you please upload a DGM India reports screenshot

Appu said…
DGM India is genuine.I got paid from them.I have also felt that their customer support is very good.A person from DGM calls me personaly and interacts about my site also.It is cost per action.As you have mentioned you can expect CPM to be around 40 rupees the maximum.Earnings only upon conversions (sales or lead).You get commission for every sale or lead.Now in the code you have to change [RANDOM] with a two digit number .Other wise your sales won;t get tracked.There is good potential on DGM if the products match your targetted audience.

Appu said…
Advertisers come and go on DGM.That is usual and they mail us to pull out the banners.DGM is not any fraud network.

i shall review DGM and show the reports.

Take care in changing the [RANDOM] in the code with a double digit number.Otherwise ads will be displayed and advertisers won't pay you as not tracking will be taking place.
January 19, 2009 at 7:56 PM

jaypatch said…
You can try Ohana Media also. Ohana Media is an ad network targeting India, Middle East and south East Asia regions. We have two networks 'Ohana Brand' - A cluster of premium content websites and 'Ohana Direct' - A performance network'. We are not adsense like network, we are a CPM / CPA and performance network, where you can maximize revenues on your traffic as a publisher or ROI as an advertiser.
July 30, 2009 at 1:10 PM

musicm said…
I have been with komli for 6 months nothing seems to be good they pay pennies which is not at acceptable.

They are rude while replying to their customers, also they do not make payments.

In last 4 months they made only the first payment and still my 50,000 is due on them but when i mail them or contact them there is no response.

They keep telling that they will make the payment soon please wait but now as its too long they are not even able to tell that and are not just replying.